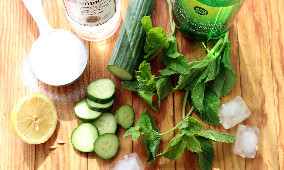 A peychaud flavored Bitters. Bitters are highly concentrated flavoring agents made from roots, barks, herbs, and/or berries. Bitters are reputed to have medicinal qualities. Some, such as Compari and Fernet-Branca from Italy are believed to be such good stomach settlers and may even be useful in treating hangovers. Bitters such as Angostura are also effective in minute quantities as smoothing out the taste of a particularly harsh or bitter whiskey. Abbot's bitters have been made in baltimore since 1865, Peychoud bitters come from New Orleans and Orange Bitters are made in England from the dried peels of seville oranges.