Poor all ingredients into a shaker. Shake well and strain into a Martini glass.

Best served in a Cocktail Glass.

Food Advertisements by
Apple Martini: is a vodka- based cocktail with apple flavor. To add apple flavor, apple juice, apple cider or apple liqueur or a combination of two is used. A popular recipe of Apple Martini is vodka, apple liqueur and cointreau is mixed in a shaker filled with ice, then poured in a chilled cocktail glass and served with apple slice as a garnish 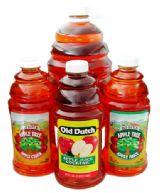