Read this story before preparation:

The CARBOMB: The Creation of An Historic Cocktail
Charles Burke Cronin Oat
Master of Mixology 1967-2007

This incredibly tasty drink was invented in 1979 as a follow up to the shot
which I created in 1977 on St. Patrick's Day.

NOTE: Before you start; understand that this was a carefully thought out "Cocktail",
a Recipe!!! To you naysayers on the Kahlua because it is not Irish.. remember a Margarita has Triple sec and it is French. The Carbomb is a recipe

Originally the shot was called a Grandfather- 1/2 oz. give or take of Baileys and 1/4 oz.or so of Kahlua The name Grandfather lasted through the
first hour of its life and many, many toasts to our grandfathers were made.
I put it together for my brothers who were visiting my pub, Wilson's
Saloon, 76 Franklin St. Norwich, Ct. Est. 1886, that St. Patrick’s Day afternoon.
Being St. Patrick’s Day heavy toasting was in order. However, after consuming a few "Grandfathers" along with Pints of Guinness, the true drink of “The Day”; we all realized something was missing. The taste was incredible!!! (Kahlua was key to this) but, couldn't quite get the buzz going. I knew immediately what it was, and with a laugh at our stupidity, I yelled for a bottle of Jameson.
As I poured the whiskey into the shot of Baileys and Kahlua I commented that “the IRA just showed up. This oughta work now!” (As you add the Jameson to the Baileys and Kahlua, the shot boils up like an explosion, hence the IRA.) Others at the bar joined in to the toasting , “Give us some of those IRA shots they’re drinking ” was the call up and down the bar. And the name Grandfather disappeared and the IRA was born.(In its early days the use of Scotch and American whiskeys was used in place of Jameson throughout the area, because so very few establishments had an Irish Whiskey. An ugly thought.}
Two years later, drinking IRAs and Guinness with my manager, I got the
crazy idea as we were toasting to drop the shot in my half finished Guinness.
The look in his eyes as I held the shot over the Guinness said it all. "Bombs
Away " was the call. We called it the Belfast Carbomb, Irish Carbomb in other company, and “Carbomb?” when we were looking for a fellow reprobate to join us in celebrating the fact that we had survived another day.
The drink languished in Ct. and was slowly spread across America by the
many Navy personnel who frequented Wilson's Saloon. World renown for this drink did not come until many years later. The marketing blitz by the Guinness corporation late 80's early 90's got things rolling. The popularity explosion of Guinness in America that resulted made all things created with Guinness popular too.
The Carbomb is fun to drink, tastes great, women love them equally as well as men!
A final note: If you invent a drink such as the Carbomb, as I did so long
ago, beware! You never know if it might become famous, so pick the name
carefully. IRA and Carbomb are "cool" in the bar scene, but in the reality
of today NOT. Did you know you can order and get a "carbomb" in Dublin,
Ireland, I've been told. I find that truly the most amazing part of the IRA
and Carbombs' historic journey.

Best served in a Pint Glass.

Drink Recipes made with the Ingredients Above 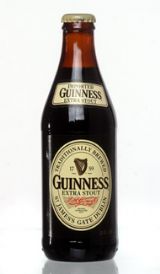